In this Case Study, AFS conducts a root cause failure analysis on a pipeline failure, which occurred at the base of a 90° elbow where an onshore pipeline emerged from underground.

A single, non-piggable pipeline section developed a failure at the base of a 90° elbow. The production fluid velocities were low enough such that liquid was suspected to be accumulating and fluids were not being swept through the pipeline. The cause of the failure was unknown, and the operator requested a metallurgical evaluation for potential corrosion mechanisms responsible for the pipe section failure.

AFS completed optical emission spectroscopy (OES), energy dispersive spectroscopy (EDS), x-ray diffraction analysis (XRD), and 28-day serial dilution bacterial analyses of surface deposits. The pipe wall was also coated with paraffin deposits. Visualization of the pipe inner wall at the elbow joint revealed several pits supporting an under deposit mechanism as a primary cause for corrosion. Some exceptionally aggressive pits were noted near the 90° elbow where fluids could presumably gather under some low flow production conditions. One example near the weld joint is shown in Figure 1. The blue line highlighted in the close-up traces the surface scan, which notes a peak corresponding to the weld and a valley lining up with the area of localized corrosion. 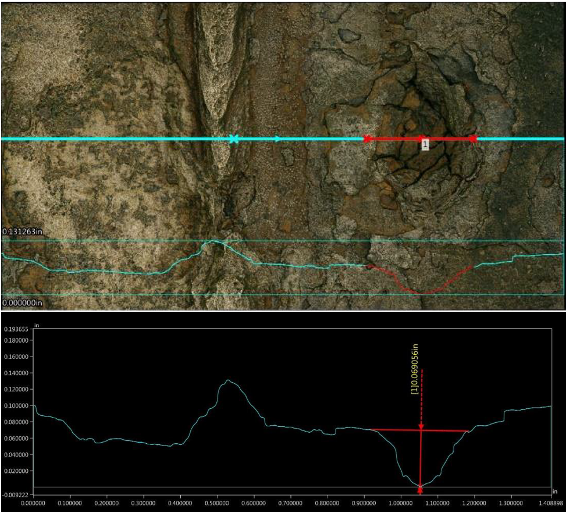 Figure 1 – Inner wall image at the weld joint from the 90° elbow. A clear pit is noted with a depth greater than 0.06-inch.

The EDS map of elements note high concentrations of carbon above the metal surface and chlorine on the surface of the pit. The carbon is attributed to paraffin deposited on the pipe surface and the chlorine likely comes from produced water. Chloride ions are known to accelerate rates of corrosion and can accelerate pitting.

Figure 2 – EDS element maps corresponding to an SEM image (top left, grey) of the cross-section of the pit shown in Figure 1.

In summary, this study evaluated the pipe failure at the base of the 90° elbow. The metallurgical analysis suggests under deposit corrosion as the likely genesis of the localized corrosion. The pitting noted was likely to have been accelerated by the presence of chloride ions.

Based on the findings in the study, AFS recommended a pipeline integrity management program be developed and implemented, which should include routine water analyses, coupon monitoring program, and routine pigging schedules (if possible).

For more information about the AFS laboratory services, please visit our dedicated service page or contact us to discuss your specific project challenges in more detail.