In this case study, AFS applies the company’s problem-solving ethos of “Measure. Model. Solve.” to determine the potential for emulsions to form in a field under realistic operating conditions.

An emulsion risk was identified in a greenfield production fluid. However, the initial emulsion tests were performed in a lab with very high shear rates. The high shear rates did not represent realistic field conditions, yet the implications for operations were severe if these tests had been taken at face value.

In the AFS laboratory, the production fluid was first mixed with water at varying watercuts and stirrer rates with larger stirrer rates correlating to a larger shear placed on the oil / water mixture. After mixing for a set duration, the samples were each allowed to sit to determine if a stable emulsion had formed. For each watercut, the critical stirrer rate at which stable emulsions would form was found in RPMs. 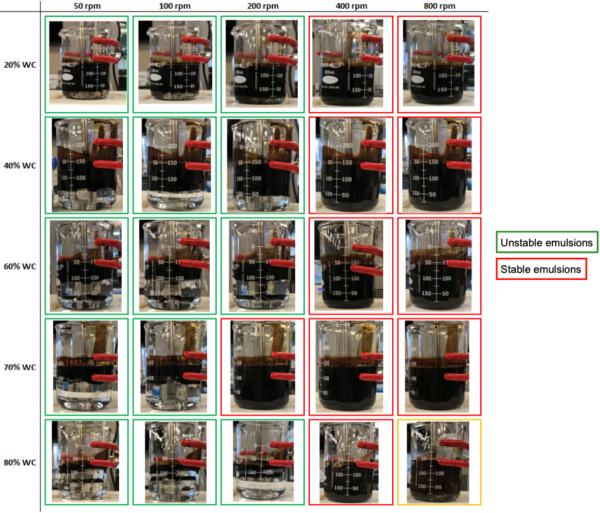 Next, computational fluid dynamics (CFD) simulations were used to determine the average shear rates experienced by the oil / water mixture based on the stirrer rates used in the lab tests. AFS created CAD drawings of the lab equipment and ran CFD simulations in-house.

A total of 10 wells were assessed as part of the study and only 2 were shown to have shear rates large enough to produce stable emulsions during operations. This is a far different outlook than initial lab data indicated, which was overly conservative. As a result, AFS was able to help the client significantly reduce costs that would have been associated with handling emulsions across all 10 of the wells. Being able to combine laboratory testing with advanced modeling was extremely important for this study and is made possible at AFS with the holistic principle of Measure. Model. Solve.

For more information about AFS services, please visit our dedicated service page or contact us to discuss your specific project challenges in more detail.