In this Case Study, AFS combined data analytics, engineering, and laboratory testing to determine the root cause of rising pressure drop in a production flowline.

AFS was asked to determine whether the rising dP was due to a restriction in the flowline or possible liquid hold-up, and to explore potential mitigation options. 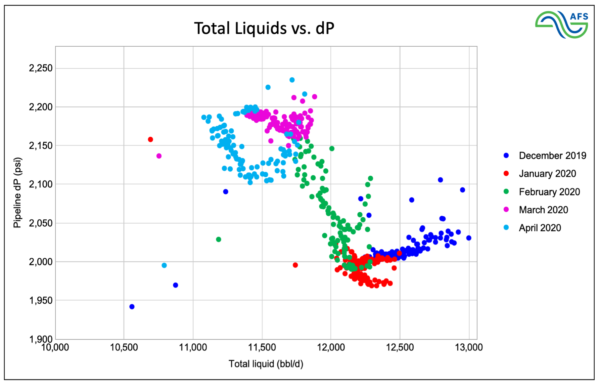 Crude oil characterization indicated both asphaltene and wax precipitation could occur under various production conditions. Closer examination of production data and flowline  modeling indicated wax to be a likely source of deposition, while ASIST modeling did not predict asphaltene destabilization as a current flow assurance risk. Flowline temperature modeling combined with wax solubility curves showed wax (paraffin) deposition was most likely occurring in the riser.

Analyzing the chemical injection rates as a function of normalized dP showed the paraffin dispersant (PD) was not an effective chemical and was possibly contributing to the increased pressure observed in the flowline. Based on the field data analysis, an alternative paraffin inhibitor (PI) was evaluated using wax loop tests, which examined the dose response of the PI compared to uninhibited crude oil. The laboratory study showed dose rates less than 500 ppm were ineffective, while dose rates above 650 ppm were effective in reducing deposition tendencies (Figure 2). A recommendation to conduct a xylene soak, change PI chemistries, and discontinue injection of the PD was presented to the operator. 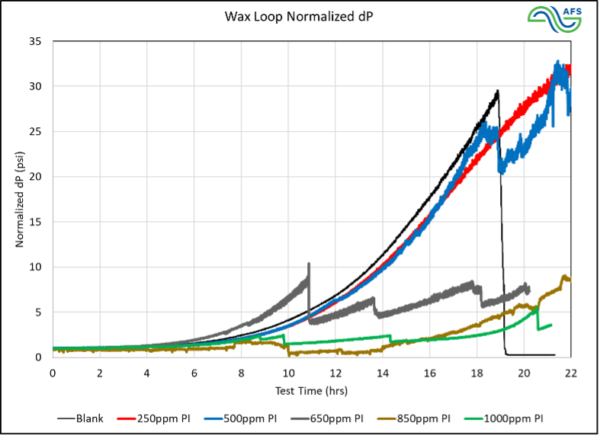 In summary, this study combined data analytics, modeling and laboratory testing to identify the likely source of the rising flowline pressure. AFS was able to:

For more information about AFS Laboratory services, please visit our dedicated service page or contact us to discuss you